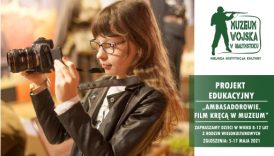 We would like to invite you to take a part in the educational project ‘Ambassadors. Movie making in the Museum”. The activity, for which recruitment begins on 5 May this year, is addressed to children from multicultural families.

During the project, they will take a part in a series of workshops conducted by museum workers and invited guests, including Julita Charytoniuk, Justyna Godlewska-Kruczkowska, Anush Antonynan and Julita Grabowska. The final will be a jointly produced film, which Bartosz Tryzna will help to make.

During the workshops, participants will learn about the history of Poland and the multicultural Podlasie region. In an unusual way – apart from exhibits and displays, also through singing, traditional games, plays and tastes. Activities will take a place from 22 May to 27 June this year. Participation in the project is free of charge. The number of places is limited, the order of applications is decisive. You can sign up in person at the Museum ticket office (ul. J. Kilińskiego 7) or by e-mail. A scanned copy of the statement completed and signed by the legal guardian should be sent to: tmisarko@mwb.com.pl.

The coordinator of the project is Teresa Przepieść-Misarko. Leaders:

Justyna Godlewska-Kruczkowska – actress, speech therapist, pedagogue, co-organiser of the Theatre Workshop. Over 20 years on stage and 60 roles in performances of the Aleksander Węgierko Drama Theatre in Białystok. Instructor of theatre workshops for children, youth and adults.

Anush Antonynan – an Armenian by origin, a cultural studies scholar, a master’s degree in defence and national security. For many years she was an assistant of foreign families in the Dialog Foundation. She took a part in educational and cultural projects. She is a family mediator and a career advisor. Until recently, she ran the Smaki Kaukazu restaurant in Białystok. She is a happy mother of two daughters and a conscientious citizen of the Republic of Poland.

Julita Grabowska is a pedagogue, cultural expert, privately associated with Teatr Temat in Warsaw, with which she performed at the Terra Incognita festival in St. Petersburg, author of numerous educational projects carried out in the Army Museum in Białystok. Happy mother of a six-month-old toddler.