The beginnings of the Army Museum in Białystok date back to 1968. In September that year, a Department of the Military History was established at the District Museum (now the Podlasie Museumin Białystok). It researched the rich military history of the north-eastern region of Poland and was gathering the exhibits related to it. The new institution was allocated a part of the rooms in the Guest Palace at 6 Kilińskiego Street. Nevertheless, they were not able to accommodate the rapidly growing collections and it became necessary to find a new seat. In 1974, the authorities of Białystok allocated a building for this purpose at 7 Kilińskiego Street, opposite the current headquarters. 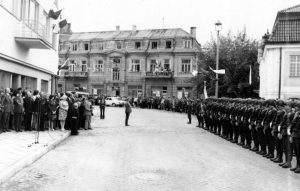 Until World War I, the premises at 7 Kilińskiego Street had been occupied by the supply service of the Russian 6th Army Corps, stationed in Białystok and in the nearby localities. During the war, the old building had been demolished and only in 1930 a new one was erected, called a rotunda by the inhabitants due to its characteristic appearance. It housed the residential units and a warehouse of the building materials. Fortunately, it had not suffered too much during World War II and in 1945 it was handed over to the School of Painting and Artistic Craft (currently the Secondary School of Fine Arts in Supraśl). The next owner of the facility was the State Music School, conducting its activities at Kilińskiego Street in the years 1960–1973.
The new headquarters of the museum was created as a permanent exhibition entitled ‘The History of the Polish Arms’, presenting weapons and military activities over almost a thousand years (from the 10th to the 20th century). The quickly growing collection and active scientific activity of the employees of the museum created a need for the museum to become independent. In 1976, a decision was taken to grant the existing branch a status of an independent unit under the name of the Army Museum in Białystok. Its first director was Col. Zygmunt Kosztyla, Ph.D. (1929¬–1987). The founder of the Białystok museum was also an author related to many works on the history of the region.
The next director of the Army Museum was Lt. Col. Janusz Figura (1947–1997), and then Krzysztof Filipow, Ph.D., Sc.D. Since a beginning of 2010, Robert Sadowski fulfilled a role of the director. In the same year, an intensive work began on changing the permanent exhibition. Within three years exhibitions were created: ‘Between Two Wars 1914–1939’, ‘Against Two Enemies. Military History of Podlasie and its Inhabitants in the Years 1939–1956’and‘Polish Army 1956–2010’. Using the innovative and interactive methods of presenting the exhibits, they continue a tradition of bringing the knowledge of the past to the visitors, in particular the military history of the region. They also form a foundation of the implemented educational and social programmes.
Since 1980, the Military History Research Centre has been operating at the Museum. It organises the scientific conferences and also carries out the extensive publishing activities. Here, it is worth mentioning such publications as the ‘Scientific Journal of the Army Museum’ and the ‘Studies and Materials for the Military History’. The employees of the Centre conduct research on the military history, first and foremost, in the region, but also in Poland and Europe. They also cooperate with the academic employees of the University of Białystok.
The Army Museum in Białystok is the largest institution of this type in the Podlasie Province and one of the most willingly visited museums. In 2018, it reached a turnout of over 40,000 visitors.
Within the 50 years of activity, the Army Museum has gathered a substantial collection of exhibits. They have originated from the purchases and excavations, but also from the gifts of the towninhabitants and local military units. Our collections include the white weapon from the Middle Ages to the Uhlan swords, firearms from almost all European countries, as well as the pieces of the equipment and uniforms (mainly Polish, German and Russian). An acquisition of the new exhibits aims at recreating an appearance of the soldiers from the specific historical periods. A collection of the historical documents is a separate collection.