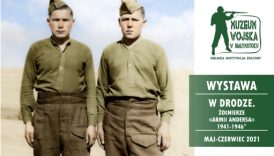 Marcin Koziński (author of the exhibition): “The Army Museum in Bialystok has in its collection numerous exhibits related to the service of soldiers in the ‘Anders Army’. Among them are photographs of soldiers, taken by themselves or by the Military Bureau of Propaganda and Education of the Polish Armed Forces in the USSR, the Propaganda and Culture Branch of the Polish Army Command in the East, and the Photographic Section of the Culture and Press Branch of the 2nd Polish Corps in the years 1941-1946. These are photographs of various sizes and state of preservation, sometimes with descriptions on the back, almost all of them black and white or sepia. Taking them in our hands, we have a sense of contact with distant history. How to make it closer? Perhaps an attempt to restore the colours of old photographs will allow us to better enter the world of their characters? We will try to do so with the help of Mr Mirosław Szponar, the author of the colouring of the photographs”.

You can get free exhibition catalogues at the Museum’s ticket office (7 Kilińskiego Street). We also invite you to visit the project website: https://mwb.com.pl/wdrodze/